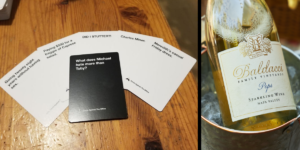 As we continue to bunker down during the Quarantine, we are left with the ongoing challenge of trying to stay entertained while stuck at home. One positive result is the revitalization of our love for table games! There are thousands of table games out there: party games, strategy games, comical games, collaborative games – the list goes on! To simplify your search, we are providing some of our favorite table game + wine pairings below that we encourage you to try out. Create an online group to play simulaneously…the more you drink, the more fun your group will have!

Remember the good ol’ days of treasure hunts? Well, they are making a big comeback with Treasure Run’s super easy, in-home setup – and it only takes a few minutes to get started! Simply go to their website and choose between various hiding spots in the household. Then, choose a theme for the treasure run and you’re ready to go! Treasure Run will automatically generate clues based on your hiding spots and allow your kids to uncover them using a variety of brain teasers. Some of the hints are quite tricky too! There is a great educational aspect to this game making it very enjoyable watching the kids scramble to uncover the hidden clues. Terrific for parties, holidays, homeschooling, or just a lazy day around the house. As a parent, the true joy of this game comes from sitting back, relaxing, and watching the kids have a blast. For this reason, we believe Treasure Run pairs perfectly with our Fraternity Red Wine Blend. This blend is your classic “sit back and relax” type of wine. By the time you’re done drinking, you will probably want to hop in a game of Treasure Run yourself and see how well you compete against the kids!

If you’re the type of person that enjoys fast-paced, strategic game play, then look no further than Settlers of Catan. Known for its unique hexagonal board, the game requires players to successfully gather resources, develop settlements, and earn enough victory points to become the top settler. The exhilarating aspect of this game is there are many different strategies one can take to accumulate the most victory points. You can go the route of building the longest road and limit players from expanding throughout the map. Or, you can use the development cards approach and hope you pull enough good cards to lead you to victory. However you go about it, you can ensure the game will have plenty of twists and turns that come down to the roll of the dice. Given there are so many layers and complexities to this game, it pairs great with our Black Label Cabernet Sauvignon. Let the power and grace seen in this wine guide you to victory on the Catan board!

When it comes to dice games, Liar’s Dice is one that never loses its sense of nostalgia. The game is very easy to pick up with just a handful of rules and only requires dice and cups to be able to play. You start by rolling your personal cup of five dice then make a claim for how many of a specific number you believe to be on the table between everyone’s dice. The player to the left then has to either increase that claim or call “Liar’s Dice” and have everyone pull their cups to see if the original claim is true. If you are caught lying, or falsely call “Liar’s Dice” then you lose one of your dice. The goal of the game is to be the last person standing with dice in their cup. There are two strategies to use in this game: 1. Be confident with your dice and make claims you believe will add up on the table. 2. Deceive your opponents by making false claims then expose them when it is your turn again. However you go about it, this game is sure to bring lots of shouts and laughter to the table. For this game, we recommend pairing it with our Elizabeth Pinot Noir. With a rich structure of dark fruits and baking spice, typical Pinot drinkers are often left perplexed by this unique approach to Pinot Noir. Let the deception of this Pinot Noir help you in deceiving your opponents in Liar’s Dice!

Time to show off your mental skills with a little Scrabble! This is a game that heavily relies on your ability to form complex words in a strategic manner. Each player is dealt eight letters in the beginning to use as ammo for forming long, elaborate words. The less common the letter, the more points associated with that letter. After correctly forming a word, you sum up all the letter points. The winner is decided by having the most total points when all the letter tiles are depleted from the bank. There are many ways to be strategic in this game other than having a dictionary for a brain. You can aim for the multipliers that are set throughout the board or use common letters to expand a current word on the board. However you go about it, you can ensure this game will break a mental sweat for everyone at the table. We recommend pairing our Calistoga Cabernet Sauvignon with Scrabble. There are many complexities with this varietal that unfolds throughout its path – let this wine bring out hidden complexities on the Scrabble board, leading you to a long, rich victory!

An oldie but still a goodie – Dominoes. If you have yet to learn how to play Dominoes, don’t be discouraged! It is super simple to pick up and oddly addicting. The game starts by having everyone draw five tiles. The remaining tiles are left face down and pushed aside to sit in “The Boneyard.” The players then go around clockwise laying down their tiles one at a time. You can only connect a tile if you have the same number as one of the end dominoes on the table. If you don’t have a playable tile, you must pull from The Boneyard. When connecting a tile, the goal is to get the end pieces to add up to a multiple of five. A person is rewarded a point for each multiple of five they accumulate during their play. For example, if the end pieces are a six and a four, that adds up to 10, in which that person is awarded two points (10 / 5 = 2). The first person to lay down all their tiles is awarded points from all the remaining players’ un-played tiles. Then, you continue starting new rounds until someone hits enough points to win. Dominoes games typically go up to 50 points, but the players can decide the winning score prior to starting the game. We recommend pairing Dominoes with our Sorelle Chardonnay. Dominoes is a game of balance – with all the different directions the board can go, the goal is to make it balance out and be a multiple of five. The balance between citrus and tropical flavors shown in our Sorelle Chardonnay will help with your decision to balance out the Domino board!

If you have heard of Cards Against Humanity, then you have probably heard of some of the ridiculous stories that go along with it. The game is less about winning and more about the zaniness that comes from playing it – and reveling in the awkwardness. Each player draws 10 white cards known as the “answer cards” while players alternate one at a time being the Card Czar drawing the black card. The black card will describe a scenario in which the rest of the table must submit an answer using one of their answer cards. This is where the real fun kicks in. The Card Czar reads out loud each answer card for the amusement of the whole table. With each answer card remaining anonymous to who submitted it, the Card Czar chooses the funniest one that goes along with the black card. What really gets the table going is when they find out it was Grandma who submitted “Unfathomable stupidity” to the scenario card “What ended my last relationship.” Grandma is then rewarded an “Awesome Point” for choosing the best answer and the Card Czar rotates to the next person. It’s up to the table to decide how many Awesome Points one needs to be declared the winner. We recommend pairing this game with a bottle of our Pops Sparkling Wine. The lively, bubbly nature of this varietal will keep the whole table hooting and hollering all night! As a sidenote, Cards Against Humanity is an R-rated game – we recommend playing the PG-rated version, Apples to Apples, if kids are involved.